Let’s be real, we all peer into each other’s lives through social media interaction. We scroll through our timeline and give each post and photo our approval via a “like,” “double tap” or a comment. At times, we commit to these actions more often than we actually commit to reaching out to the people we care about because social media interaction has become the new social interaction. The line between what’s real and what’s not has become skewed beyond recognition. It has become the norm for us to show our level of care and appreciation for one another via social media first. In fact, if we don’t, one may think that you do not care about your loved ones. We use social media interaction as a way to keep up with the pace of the cultural demand that we must know about everything that is happening at any given time.

So, what does this have to do with my pregnancy you ask? Earlier this year, I announced my engagement via Facebook and I received a phone call inquiring about it. Let’s be clear, I expected there to be shock because there are people that have this assumption that I hate men and/or don’t have the capability to captivate a man’s heart (silly rabbits), but that wasn’t the nature of their shock. On this phone call, they were actually upset and didn’t understand why I didn’t share that I was dating someone before the engagement. In a sense, they felt out of the loop; as if I missed a few posts of information on social media. It never dawned on us that we actually have the power to reach out to people personally versus waiting for every detail to appear on social media.

I loved the first episode from Season 3 of Netflix’s British born “Black Mirror”. It is a story of a woman, Lacie, that participates in a social platform that summarizes a person’s value through a rating system. She has such a good, not great, rating that a childhood friend of hers, who never really treated her as such, reaches out to her seeking a speech to be made at her wedding as the maid-of-honor. 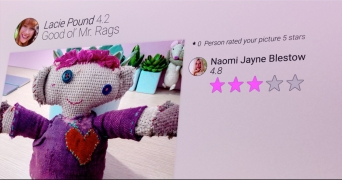 Their entire conversation with one another is superficial and disingenuous. Unfortunately, Lacie experiences a series of unfortunate events, which causes her score, via the rating system, to drop significantly. It is then that her childhood friend’s true intentions are revealed, which crushes Lacie because of her own ulterior motives. A key detail is usually missed from this episode: Naomi only reached out to Lacie because of what was in the photo that Lacie posted from their past. Granted Lacie only posted the photo to gain Naomi’s approval. However, Naomi saw the photo and used that intimate moment of Lacie’s as a way to gain what she needed from her as well.

We use social media interaction as a way to stay in contact with one another, but its when a person is delusional about their position in that person’s life that it becomes a problem. Social media has created this sense of false intimacy and closeness; it is to the point of leading our relationships with one another astray. We think we know a person on a much deeper level than we actually do because we are using social media as the sole means of exchanging intimacy with that person. We become offended when the truth about the delusion is revealed versus us appreciating the provided clarity to an otherwise confusing situation. We spend a large amount of our time building shallow relationships with a large web of people, then expect for those people to exchange intimate details about their life on platforms where majority of those interacting are not being genuine themselves. As your social status and social following gets bigger and more pervasive, this chasm becomes even more difficult to cross.

Damn, that was a mouthful.

Let me clarify and make it clear that this is not to belittle anyone that has decided to be  open about intimate moments in their life. My heart smiles when I see images of babies, birth videos and etc. I am also not alluding that social media is filled with only the Lacie’s and Naomi’s enamored with approval through the rating system. Moreover, this is to provide perspective as to why there are certain aspects about a person’s life that they do not have to share with us online. If a person shares photos of their pregnancy, then we

expect to see a photo of the baby, correct? We may even feel cheated when we don’t see photos of the baby. We feel that we were on the journey with them because they decided to share intimate moments on a public platform. Hell, there are people that are offended when celebrities choose not to post photos of their babies and choose to wait until they have reached a certain age instead. Although slightly taboo in today’s society and with their own individual reasons, moms are making the decision to not share photos of their children.

I do not plan to post any photos of my babies (and toddlers); I plan to keep those precious moments between our family and friends. Which is why I struggled with if I even wanted to share my pregnancy on social media (after making the decision to continue the journey). Don’t get me started on how your photos can be taken and used without your permission; I refuse to expose my children to the possibilities of the sick world online. Online privacy settings are truly giving us a false sense of security because once a photo or post is shared it can’t truly be undone. Yeah, you can delete the picture or post on your end, but what about the person that may have saved it or screenshot it to their phone for their personal safekeeping?

I will share photos of myself, but not photos of my little one. I will continue to share my personal opinions on topics and even intimate details about my experiences, but this piece of me is private and meant to be shared with those who are there in the flesh.